What is the pancreas 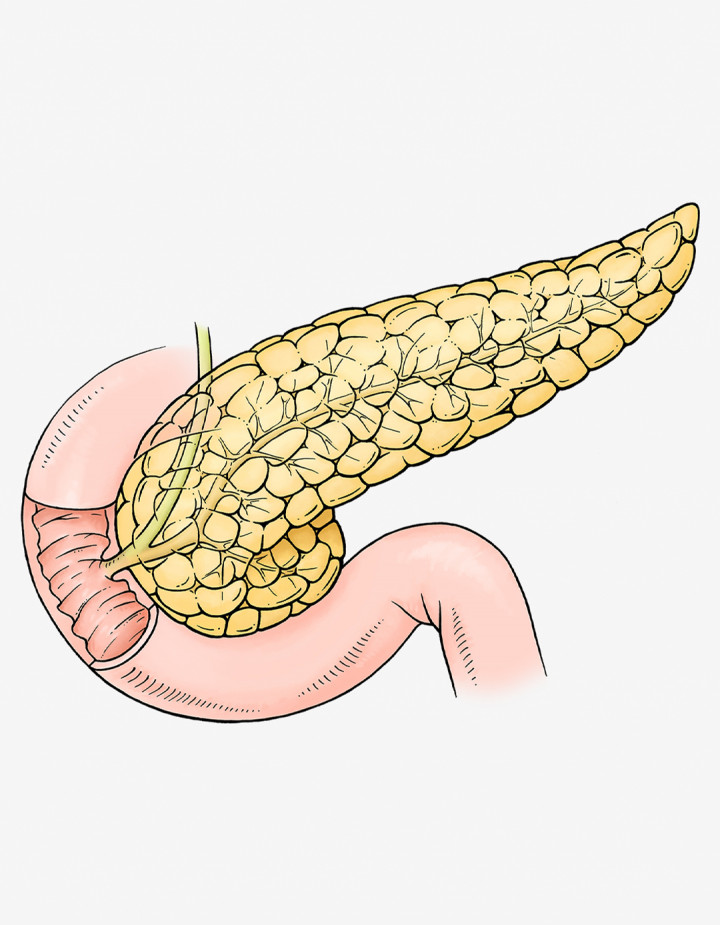 The pancreas is hidden behind the stomach and in front of the spine. It is a yellowish gland, about 15 centimetres long, 5 centimetres wide and 2 to 3 centimetres thick, weighing about 80 to 120 grams. It can be roughly divided into three parts: the head, the body and the tail.

What does the Pancreas do?

The pancreas has two functions:

The Pancreas and Digestion

The pancreas manufactures important enzymes. 1.5 - 3 liters of a secretion saturated with enzymes are produced on a daily basis. 60 g of protein are metabolized in the process, which amounts to an enormous output. Specialized cells located throughout the entire gland produce the secretion.

At first, a preliminary version is produced and pumped into a vast system of ducts from where it is released into the main pancreatic duct (ductus pancreaticus). Bile secretion produced in the liver, merges with the pancreatic secretion just before the mixture flows into the duodenum, at a point, known as the papilla Vateri.

Breaking down food into its smallest components is necessary so the body can absorb these through the intestines. In the absence of the pancreatic enzymes sugars, proteins and fats will not be broken down properly and the intestines will not be able to absorb nutrients into the bloodstream, causing diarrhea, bloating and abdominal cramps. Persistent weight loss, vitamin deficiencies and malfunctioning of other organs will also occur, these lacking the required energy, as nutrients cannot be absorbed.

The Pancreas and the Regulation of Blood Sugar

Aside from digestive enzymes, the pancreas also produces an important hormone, known as insulin . Insulin is manufactured in special groups of cells, known as the Islets of Langerhans, found throughout the pancreas. They account for only 2.5 g of the total weight of the pancreas (80 - 100 g). There are about 1.5 million of these cells. Insulin is secreted from these cells directly into the bloodstream. It is crucial in the control of blood sugar levels. Glucose is the most important of all sugar molecules. All cells depend on glucose to retain their functionality. After reaching the bloodstream through the intestines, blood sugar enters the individual cells with the help of insulin.

Blood sugar cannot enter the cells if there is not enough insulin (or none at all) in the bloodstream. If this condition is present, blood sugar levels rise constantly, leading to unpleasant or even life-threatening consequences. Diabetics suffer from varying degrees of insulin deficiency.

Another important hormone produced by the pancreas is known as glucagon. This hormone is also manufactured in the insulin cells. Glucagon counteracts insulin in the body. When cell life is threatened by a lack of blood sugar, glucagon releases residual blood sugar from elsewhere in the body, particularly the liver. In the absence of the pancreas (i.e. after surgery), the glucagon hormone can no longer be produced. This factor must be considered when caring for pancreas patients.

The production of pancreatic enzymes and insulin are by and large separate processes. If damage is done to the pancreas, both functions may be disrupted independently.

The pancreas develops from two parts that normally join together during the growth period of the embryo. In the course of embryonic development, there may be a disturbance in the joining of the pancreas, which in some cases can lead to diseases.

During the movement of the ventral part of the pancreas in the early development, parts of the duodenum can be surrounded by pancreatic tissue thereby leading to a narrowing (stenosis) of the duodenum.

The first symptoms usually arise in early childhood or in young adults. Characteristi- cally, pain in the abdomen or frequent vomiting are present. Rarely, the patients can develop jaundice. In some cases, acute or chronic inflammation of the pancreas develop due to stenosis of the pancreatic duct.

During normal development, the two separate duct systems of the pancreas fuse to form a common duct. In cases of pancreas divisum, these two duct systems do not fuse in spite of the development of a single organ. As a result, there are two separate pancreatic ducts that drain into the duodenum. Subsequently, the pancreatic duct from the dorsal larger part of the pancreas drains through the so called Ductus Santorini via a small opening called the small (minor) Papilla. The ventral pancreatic duct drains the pancreatic juice via the so called Ductus Wirsungianus through the major opening called papilla major. In this area, there is also the opening of the bileduct (Ductus choledochus).

This anatomical variation occurs in between 3 - 10% of the general population. In most cases this variation does not cause any symptoms. However, if the minor Papilla is too narrow, there is inadequate drainage of the pancreatic juice into the duodenum leading to acute or chronic inflammation of the pancreas.

The first treatment in this condition is to widen the opening of this pancreatic duct. It can be performed endoscopically by making a small cut into the minor papilla, sometimes including the insertion of a small tube. While some patients benefit from this treatment, symptoms relapse in most patients.

Nowadays, the treatment of choice is an operation where parts of the openings are excised surgically without removing any part of the pancreas. Most patients undergoing this operation experience long term symptom relief.